Continuation of the synopsis 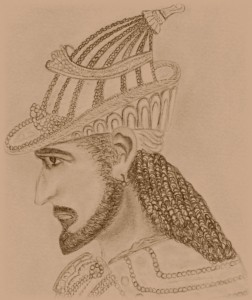 After having conquered the Balkans, Serbia and “New Rome” (Constantinople), and put an end to the Byzantine Empire, the Ottomans establish their domination over a big part of the oriental Mediterranean. In 1480, Djem’s father, Mehmet the Second, known as the Conqueror, sends out a sizeable army to the Italian peninsula, with the ambition to seize Rome and the intention of becoming a new Caesar. The operation fails, but the Christian world trembles with fear, and quickly, a crusade against the Sultan’s Empire is discussed; when the Vatican shelters Djem in forced residence, the project has become the idée-fixe of the pope and some Christian kings.

The pontiff’s ambition at that time is to overthrow Bayezid and to replace him by Djem on the throne of the Oghouz. Innocent the Eighth proclaims the imminent departure of the crusade, with, as its expected leader, either Mathias Corvin, king of Hungary, or Charles the Eighth, king of France. Of course, Djem is the keystone of that planned operation; as it happens, the pope can not imagine the prince shying away. But as he mentions this topic to him, his guest strongly opposes with these words : “God forbid that I ever join the infidels to fight the true faithful; it would be renounce to the religion of my fathers, to which I am more attached than to the Ottoman Empire, and that of the entire world !”

Innocent passes away and leaves his tiara to the sinister Alexander the Sixth Borgia, who counts only sympathizers to the sultan Bayezid, and enemies to France, among his allies.

At that moment, Charles the Eighth, who intends to take possession of his kingdom of Naples, received as an inheritance, demands that the person of prince Djem be consigned to him by the time his troops would pass in the city of Saint Peters’. The French armies prepare to assault the city of Vatican, while Alexander, overcome by panic fear, locks himself into the Saint Angel fort with his valuable hostage, the bastion in direction of which Charles the Eighths guns are now pointing.

How will Djem, whose presence is required by the greatest kings, get out of this slump?

Let us be carried by the narration of John Burchard, master of ceremonies for the popes during a quarter of a century. He paints the adventures of Djem in the Vatican, whom he was close to on a daily basis, the intrigues of the court and the crimes of the Borgia, father and son, which are equalled only by those committed by the powerful Italian families during the Renaissance.

Djem looks satisfied by the detailed explanations by John Burchard, the master of ceremonies, and adds with sarcasm:

– Whatever he does, the Holy Father will not be able to hold on much longer against the troops of the king of France. But will Charles dare…?

– The king will he attempt to turn Her Holiness out of Saint Angel? I do not know, but it would not be the first time, Your Highness, for a pope to take shelter there in the hope to protect himself from a king, an emperor, or even the angry masses: four popes of the ninth century died locked in there. Afterwards, Benedict the Sixth is strangled there in 974; Crescentius locked himself in, but finished his life there, decapitated in 998; Gregory the Seventh entrenched himself to resist Henry the Fourth, and finally, Gregory the ninth attempted to take refuge there, but in 1378, as the pontiff is locked in his castle and to signify their wrath, the Romans dismantled a large part of the building.

– So it would not be quite holy for a pope, if I dare say my dear Jean, to attempt to take shelter behind those walls. Let us hope that Charles does not forget that Alexander is not alone there, just in case…My subjects and myself are absolute strangers to the conflict between them!

– Her Majesty is no man who would not forget such detail.

– What are the real grievances certain cardinals are holding against the pope?

– The first one would be simony. In this case, as many before him, starting with his predecessor Innocent, the present pontiff is charged with “traffic of ecclesiastic charges”. More precisely, the distribution of those without any judgement to his relatives and close friends, to the detriment of those who can rightfully expect those titles and functions. As you know, Your Highness, Caesar, only seventeen years old and still a student in Pisa, is given the archbishopric of Valencia by his father, the very day of his crowning. One year later, he is given the cardinal’s hat, and therefore becomes a future candidate to the tiara. John Borgia, nephew of the pope, bishop of Monreale, takes the red hat in September 1492. Geoffroy, the pope’s last son, is canon and archdeacon of Valencia, at nine years of age, and all the ecclesiastic Borgia, cousins and nephews, are, in turns, given the hats in the colours of the Roman imperial purple. Alexander Farnese*, brother of his “concubine”, has benefited from this as well.

» You know the second, Your Highness: the intelligence of the Vatican with your brother, and the information given him by the court’s grand master of ceremonies, George Bocciardo, and the advantages he hopes to obtain from your person…

* Alexander became pope under the name of Paul the Third. Cardinal Farnese had such a fortune that he acquired, the 30th of January 1495, the most beautiful palace in Rome, which still is named after him, for a price of 5500 ducats. It was entirely restored at the beginning of the sixteenth century, and welcomed the whole Farnese family in 1526: 366 people. Given to France in 1911, the palace houses the French embassy, the Residence of France and the French School of Rome.

The pope, who took refuge in the Castle of Saint Angel, seeing the guns of France facing his weak walls, asked for mercy. Charles, whose interest laid in deposing the pope, forgave him, a decision of which he repented. Never had a pope deserved more indignation from a Christian king. He and the Venetians addressed Bayezid, sultan of the Turks, son and heir of Mahomet, to help them to drive out Charles the Eighth of Italy. One can conclude that the price of the sultan and the pontiff was one of those atrocious murders, the horror of which one can start to feel today in the very seraglio of Constantinople.

Journey of Djem in Italy 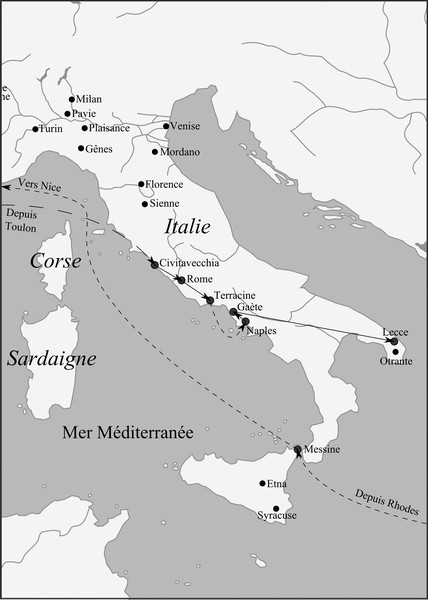