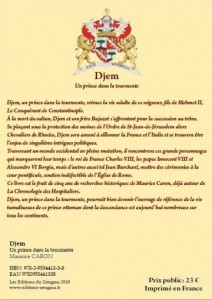 Official website for the book “Djem, un prince dans la tourmente” (“Djem, a tormented prince“, not yet availbable in english).

“Djem, a tormented prince” recounts the adult life of this noble Lord, son of Mehmet the Second, The Conqueror of Constantinople.

After the Sultan’s death, Djem and his brother Bayezid conflict for the succession to the throne.

Seeking protection with the Monks of the order of Saint-John-of-Jerusalem, at that time knights of Rhodes, Djem will travel the length and breadth of Italy and France, and will find himself being at stake in strange political intrigues.

Travelling across the changing eastern world, Djem will meet a lot of great personalities who left their trace in history: the king of France Charles the Eighth, the popes Innocent the Eighth and Alexander the Sixth Borgia, but others also, like Jean Burchard, master of ceremonies to the pontifical court, staunch support to the Roman Catholic Church.

This book is the outcome of five years of intense historical research by Maurice Caron, who already published “Chronologie des Hospitaliers“.

“Djem, a tormented prince” could very well become the work of reference concerning the turbulent life of this Ottoman prince, whose descendants are, today, numerous and scattered all over the continents.

Türbe where rests Djem to Bursa, in Anatolia

Djem rests in Bursa, in the south of the city, on the hillside in the complex of Muradiye, sheltering forty sarcophaguses belonging to members of the imperial family, spread over twelve türbes. Counting from the guarded entrance, the fifth belongs to the prince.

As the sign outside of Djem’s türbe indicates, Turkey recognizes him as carrying the title of « Sultan »

The sarcophaguses are very sober: no decorations, no inscriptions on them whatsoever. As for the buildings, they are all very simple too, except for the one belonging to Sultan Djem, entirely decorated in magnificent manner. The lower part is completely covered by tiles of blue-green earthenware, the centre of which is adorned with a golden rose. The higher part (including the dome) is entirely covered by amazing decorations worthy to be found on the most beautiful Ottoman buildings.

The complex, which is not that big, is planted with numerous trees, providing calm and peace, as one would expect.