On the tracks of Djem… 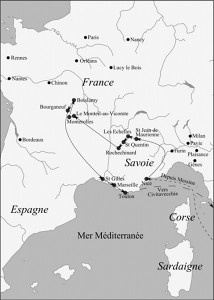 Along with thirty-five of his closest relatives, friends and officers and around twenty slaves, Djem disembarks from the imposing galley of the Hospitallers in Villefranche on the 15th of October 1482.

He stays in Nice until February of 1483, when, using the fear of the plague as a pretext, the commander Guy de Blanchefort leads him to the region of Haute Savoy: Saint-Jean de Maurienne, Les Échelles, Chambéry, Rumilly.

It is a joyful period for the prince who still possesses a glimmer of freedom, and who spends a few months in company of the young duke John the First of Savoy. A solid friendship grows between them.

June 1483: arrival to Poët-Laval, the commander of which is Charles Alleman, great prior of the Order of Saint-John of Provence (he is also the owner of the castle of Rochechinard).

Restored in 1996, rebuilt in its original state, this commandership belongs to the most beautiful towns in France. The dungeon, dating back to the 12th century dominates the town, which is built around authentic alleys and houses. Absolutely worth seeing, at 10 km to the East of Montélimar.

Djem stays for a short amount of time in Poët-Laval, before being led to the castle of Rochechinard, in the Vercors, called the “castle of vertigo”. This fortress, very damaged today, is quite hard to access by an alleyway barely accessible to a rider. One can fear that, in spite of the efforts of its present owner, this place can never be restored: the task seems really arduous.

Nothing is left of the castle of the Sassenage family (La Bâtie en Royans, town of Saint Laurent en Royans). In November 1483, Djem begins his stay in the Limousin. It starts in Monteil-au-Vicomte, in the South of Guéret, 23 km to the East of Bourganeuf. One single tower of this castle remains, partially restored a little while back, to avoid, so it seems, for it to crumble completely. During all this time, the Hospitallers build the “Zizim” tower in Bourganeuf.

After a brief stay in the castle of Morterolles (of which there is nothing left) from 1484 to 1486, the prince resides in the castle of Guy de Blanchefort in Boislamy (nowadays called Bois-Lamy, in the town of Moutiers-Malcard, 64 km to the North of Bourganeuf, under the Châtre).

These two years of imprisonment in this place so remote that time seems to to have stopped its course are particularly hard to bear for Djem, who believed himself forsaken by God himself.

Fortress including castle and manor, which one reaches through a draw bridge and another wooden bridge on pillars. Built on a square hillock and surrounded by large trenches, filled with water supplied by a pond, and, inside, the huge yard, the chapel, the quarters and the outbuildings.

The last of four still existing towers, private propriety, difficult of access in the middle of the woods is falling in ruins.

And finally Bourganeuf, in the great commandership where the edification of the tower named after him is finished. His stay on the lands of Pierre d’Aubusson lasts until November 1488, when finally happens what, no doubt, he hopes will be his liberation: his departure for the Vatican court.