When you take the road from the old town of Rhodes to travel to the site of Lindos which you simply have to visit, look well on the left, by the sea, around Masari (where the order possessed an important sugar cane plantation), right above the little port of Charaki, the ruins of the fortress of Pheraclos standing on a rock peak.

As it has been the last residence of Mourad, Djems eldest son, who is himself the ancestor of the Said-Vassallo family, and therefore of the count Charles, born in Sydney in 1971, who is it’s future prince, it is definitely worth stopping there for a while. « Mourad had returned to Rhodes in 1504. The General Chapter, by a decree issued on the 17th of December, had entrusted the grand master with the keeping of Djem’s son. The castle of Ferraclos was therefore allocated to the prince: he was keeping house like a great lord, with numerous servants, and had F. Jean Rafhno as a butler, an armed servant. The names of the children he kept close to him are unknown, neither is it clear if his wife was still alive. (Bailli F. Guy Sommi Pivenardi, grand prior of Venice, from his « Itinerary of a knight of Saint John on Rhodes Island », 1839) [Adapted by translator].

History of the fortress 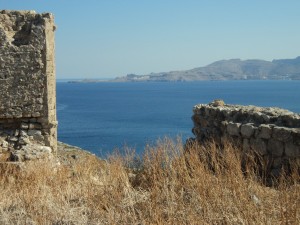 Once a Byzantine fortress, most likely built on the acropolis of an ancient city, it is the first place occupied by the knights in 1306, before they were able to invade the city of Rhodes.

The soldier monks, under magistracy of Foulques of Villaret, leave Limassol , residence of the order since 1291, on the 23d of June. With support from the pope and the king of France, thirty-five knights and a fair number of soldiers, helped by a corsair from Vienna, Vognolo de Vignoli, board on two galleys and four secondary ships in direction of the coveted island, which was held, at that time, by pirates, and, in certain areas, by the Ottomans. After having stopped for a month on the island of Castellorizo, they land near to the ruined castle of Pheraclos, of which they make themselves the masters on the 20th of September after three days of fighting. The knights invade the castle of Philerme on the 11th of November, in the centre of the island, and slay the three hundred Turks garrisoned there. The city of Rhodes ‘ resistance lasts two years before falling to the hands of the hospitallers, on the 15th of august 1308 (historians don’t agree on that date. Some claim it was 1309, others 1310,…). 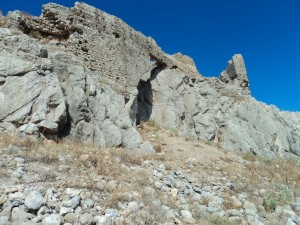 Starting from a dismantled castle, the Order commands the work necessary to turn it into a fortress worthy of the name. The citadel is changed into a prison in 1383. The prisoners were the knights deprived of their robes (which leads to think that they were many!). In 1470, under the magistracy of the grand master Orsini, the Council, fearing a new attempt by the Turks to invade the island, by decree issued on the 14th of October, takes the decision to fortify Pheraclos.

During the census of 1474, the island counted three castle facilities, each one being one of the three places where the inhabitants had to retreat to in case of a Turkish invasion. Those places were Rhodes, Lindos and Pheraclos.

Therefore, it is a completely renewed place which is put at Djem’s eldest son’s disposal in 1504. After having lived there peacefully with his family for nearly twenty years with with his relatives present on the island, Mourad travels to Rhodes during the siege of 1522, and attempts to board on one of the ships of Philippe de l’Isle Adam. But Soliman the Magnificent, who knows Djem’s son is on the island, does not agree. He actively searches for him and orders him and his son to be strangled on the hill of Cosme and Damian, by the gates of Rhodes on the very day of their arrest, as the spouse and the daughter of Amurat are locked in a seraglio on Constantinople for the rest of their lives.

Next to Mourad, the last chatelaines of this important fortress were Brother Pierino del Ponte d’Asti, who was to become grand master in Malta (1534-1535), and Brother Désiré du Puy.

The fall of Rhodes leads to that of Pheraclos and, the 29th, the day after the one on which Mourad died, Soliman learns of the capitulation of the fortress. Knights and soldiers probably obeyed to the injunctions of the Order, since the place still disposed of sufficient resources to resist longer.

Location of the site

The hill on which the fortress was standing, which has the aspect of a truncated cone, ledges into the water in the shape of a promontory. It measures around 1220 yards in circumference by its base, and roughly 165 yards in height.

One laboriously reaches the top by a steep stairway, in ruins by now, built out of stone and masonry.

At the time of Mourad, the fortress had only one gate and the fence, with it’s walls that were over two yards in width, shows round towers on ledges here and there. But just like the walls, the towers are now completely ruined.

One tank, over 7,5 yards deep and thirteen yards wide was conserved quite well, and the ruins of an old chapel and buildings, supposedly the quarters of the garrison, still show on the inside. 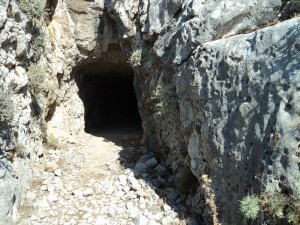 A few steps away from the bottom of the stairs one will find the entrance of an underground tunnel, about 2,2 yards high, 3,5 yards wide and some 35 or 45 yards long. It is possible that this gallery was dug to allow horses to protect themselves from the heat, hardly bearable during the summer.

Since the constructions by the hospitallers are still visible, one can ask oneself why Pheraclos almost disappeared, including its important walls. The Ottomans might have decided to destroy anything that could have helped the hospitallers for another conquest in the fifteenth century. Today, we know that the Order thought about it for more than ten years, and furthermore it is safe to assume that the Sultan knew about this project.

The general aspect still is quite impressive, and one can enjoy a magnificent view from up there. In the south, one can distinctively see the white village of Lindos.

Lindos, important archaeological site, was founded by the Dorians during the tenth century B.C… Back then, it possessed two temples dedicated to Athena and Heracles, and an astounding Acropolis.

Fortified since the Byzantine era, Lindos became a hospitaller fortress during October 1307. The grand master Foulques de Villaret fleed there in 1317, after an internal conflict with the Order and an attempt on his life. A small Turkish garrison stayed there until 1844. 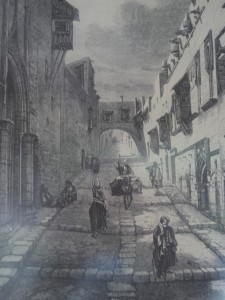 During my last visit to Rhodes in 2011, I came across a photograph of a stone carving of the street of knights (big street of the castle during the Middle Ages) during the Ottoman times, which I found quite interesting!

This most likely is exactly how this famous street was when Djem walked upon during the fifteenth century.

According to the testimonies of contemporaries, the pavements of the side walks (surprising at that time!) were slabbed with marble from antique monuments. It is crossed, at the level of the Auberge de France, by some kind of arcade or gallery, which was certainly meant to allow the hospitallers to access the « new hospital » directly, which was built between 1440 and 1480. The street still has an identical arcade at the level of the Auberge de Castille and the Auberge d’Aragon, two steps away from the palace of the grand masters.